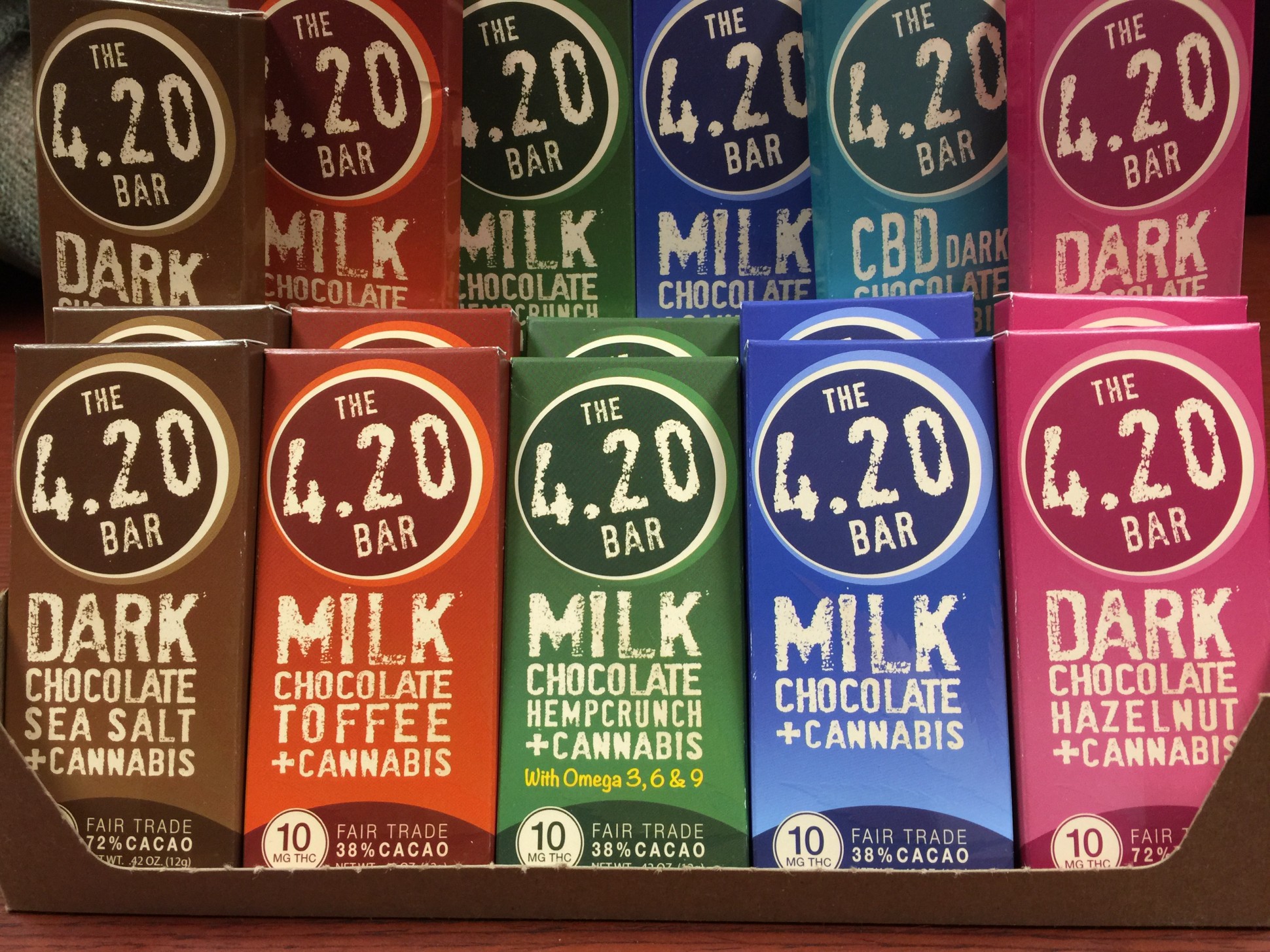 In a squat pale generic-looking building away from a main road in the industrial neighborhood of Seattle, a man picks up small bits of crystalized cannabis oil with a pair of tweezers, weighs them and places them into clear round containers the width of a quarter. He looks over at the little pile of the crystalized “shatter” he’s working with – it’s worth about $20,000.

In the next room, a candy maker tempers her liquid chocolate, adds THC oil and creates the kind of candy bars Willy Wonka seemed to actually be eating in the eponymous movie. The “420 bars” come in varieties flavored with sea salt, toffee, hazelnut or hemp crunch, and sell for around $15-20 at recreational pot shops. Evergreen Herbal, the company making these items along with THC-infused quenchers, teas, honey sticks and chewie bites has been selling them for just about two months and can barely keep up with demand.

Production lines are going in the facility seven days a week and the company is looking to hire at least six more people to add to its current roster of thirty workers. They’d like to build up a four-week inventory, said Heather Gehrman, Director of Sales, but now they’re lucky to have one week’s worth of products ready to be shipped out. The newly-hired general manager has food production experience and was brought in, in part, to make the start-up’s current manufacturing processes more efficient.

The owners of Evergreen Herbal came to Washington State from California where they own The Venice Cookie Company, another edibles maker. Co-owner Marco Hoffman started Evergreen Herbal to make medical marijuana products in Washington in 2013 and began producing recreational edible products when those sales became legal in Washington in 2014. The new entity had to be created because marijuana companies cannot operate across state lines, and cannot deliver products to other states, even those where the products are legal.

Evergreen Herbals’ recreational .42 ounce 420 Chocolate Bars each contain 10mg of THC, so one serving size is one dose according to Washington State law. The honey sticks, tea bags and 420 chewie bites also contain 10mg of THC. Similar products are currently sold by Evergreen Herbal in medical marijuana dispensaries, but with higher THC content. Elise McDonough the author of the High Times Cannabis Cookbook suggests new or less experienced users take in no more than 10mg of THC in the first two hours in her “10 Commandments of Marijuana Edibles Safety.” More experienced users can generally take in 20-25mg of THC without adverse effects she said.

The company’s newest products, which will be rolled out soon in the recreational market, are a line of THC-Infused sparkling drinks called Cannabis Quenchers. Each bottle will contain three doses of THC, so anyone who glugs one down to slake their thirst at an outdoor concert will likely miss the concert. “They should not drink the whole thing themselves,” said Gehrman.

While retailers and customers have been asking the company for less expensive products, cannabis edible manufacturers have costs that other food companies don’t. All packaging has to be child-proof, so a candy bar has to be wrapped in something that can be cut open but not torn open. All areas of the manufacturing facility that contain marijuana must be under video surveillance, so there is a cost to the cameras and the storage of the footage. All products have to be tracked in the state software system, from “seed to sale” and products must be quarantined before they are shipped out in case state auditors want to check in on the business.

Creating marijuana-based products, the company faces other challenges. “We walk on eggshells all the time with banks, landlords, everyone,” said Gehrman, because those companies are wary of money that is not FDIC insurable and an industry that used to be illegal. The company is also limited in giving away samples to potential retailers. “It’s hard for a store to know if they want to stock something if we can’t provide any enough free product for them to try,” said Gehrman. Laws also prohibit employees from purchasing the products made on-site, except from an authorized retailer, so there are no employee discounts.

Despite the challenges, the recreational product sales have been growing at a fast clip. So fast, in fact, that in two months of effort they are already selling about half the sales volume that their medical marijuana sister products do, and those have been on the market for two years. 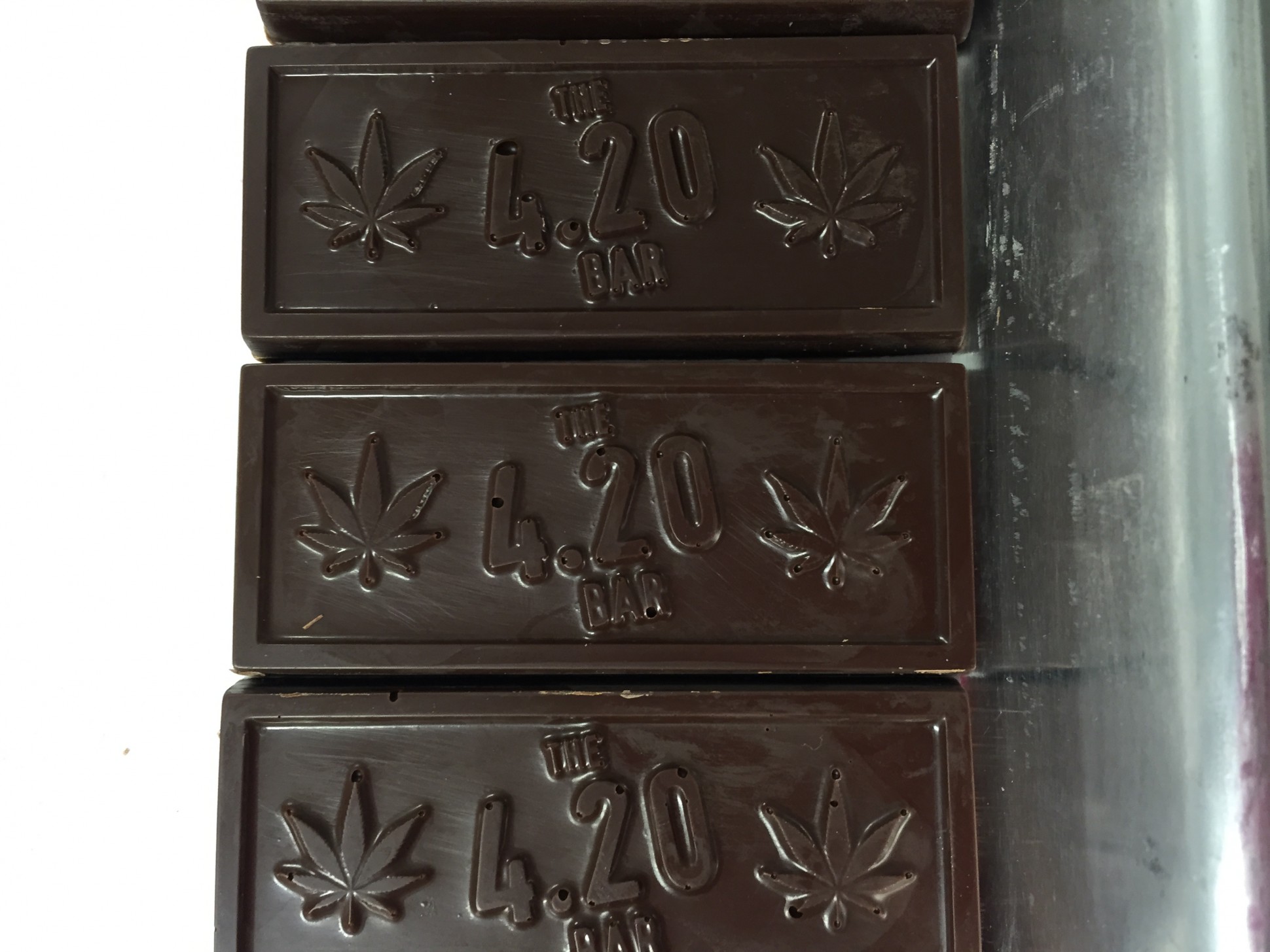 Protecting Our Staff, Vendors and the Community from COVID-19

Grab your golden ticket and tour a cannabis candy factory